Bungalows for Sale in Dallas TX 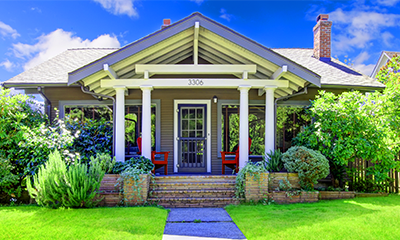 You can also create and save a custom home search by clicking the "Save this Search" button and register for a free account. A custom search will allow you to receive email alerts when a new bungalow for sale hits the market.

Jump To: All Bungalows for Sale | Bungalow Info | Contact Us

KnoxRE.com is updated every 15 minutes by a direct feed from the local Dallas-Fort Worth MLS which will give a visitor desired information for bungalow properties like images; days on market; subdivision information; feeder school information; HOA dues; frequency of the HOA dues; estimated county taxes and more.

If you see a property displayed, it means the home is still available for purchase.  Our site only displays currently active bungalows for sale.  If a listing goes under contract, it is removed from the listing display for ease of use and navigation for visitors.

To view more Dallas home listings, see the alphabetical list of subdivisions in the area below.  Click on any of the listed subdivisions below to visit that neighborhood's page.  If you would like to view all Dallas real estate listings, click on the link at the top of the page.

Where to Find a Bungalow in Dallas

There are many advantages to owning a bungalow style house, primarily because they are on a single level. Bungalows pose a convenient housing option for elderly or disabled individuals and young families because they do not have staircases.

Having the entire home on one level makes it far more manageable for those who have difficulty with stairs, and young families who do not want to risk the danger of staircases with young children. It is also typically cheaper to heat and cool a bungalow because the home is on one level. Bungalows in Dallas can be very private homes because they are low to the ground and can easily be blocked by shrubs, trees, and fences.

Some of the drawbacks to owning a bungalow include higher up-front costs since they cost more per square foot. Dallas Bungalows also require more material for roofing. The typical configuration of a bungalow includes smaller, fewer rooms extending off of a larger living room.

Although bungalows are typically smaller in terms of square footage, it is not uncommon for them to be built larger as well. Bungalows are traditionally built on a single level, but it is possible for a bungalow to be raised partially above ground with a basement (although unusual on a bungalow house in Dallas) to allow additional sunlight into the home.  However, most of the bungalows for sale in Dallas will have pier and beam foundation construction.

What is a Bungalow?

A bungalow is a small, single-level home that typically has a compact, square-like shape with wood, stone, or brick exterior. The bungalow design is charming and filled with character and has become popularized throughout the world. Their characteristics vary, but bungalows in the United States are always detached, meaning they are freestanding homes that do not share a wall with another home.

Bungalow house plans in Dallas include dormer windows, which are windows built into a pitched roof (also known as rooftop windows), a wide front porch/veranda that spans the entire front of the home, and a sloping roof.

Bungalows differ from ranches in that they have more of a compact, square-like structure whereas ranches have a rectangular design and are more spread out. Ranches also typically include an attached garage and vaulted ceilings which bungalows usually do not have.

The bungalow architectural style originated in the Bengal region of the Indian subcontinent in the 17th century. The word ‘bungalow’ stems from the Hindi word ‘Bengali,’ which means “house in the Bengal style.” The term was first found in English in 1696 when it was used to describe the homes (called “bungales”) that English sailors lived in during their time in India working for the East India Company.

The bungalow style was brought to America and became popularized among the lower middle class because they were relatively inexpensive to build. Bungalows offered an affordable alternative to living in an apartment or townhome and were a desirable housing option because they were private and not connected to other homes.

Between 1908 and 1940, Sears began to sell bungalow-style kit homes via mail through their Sears Home Catalog. These homes were shipped in a boxcar and delivered with a daunting 75-page instruction manual. The bungalow home kits contained about 10,000 to 30,000 pieces. Sears estimates that more than 70,000 kit homes were sold in the United States during this time in a variety of architectural styles, many of which were bungalows. The bungalow style home soon came to epitomize the affordable “American Dream.”

The term ‘bungalow’ has varying definitions throughout the world. The average-sized bungalow is typically about 1,800 square feet or about 30’ x 60’ per unit. Bungalows typically have a square-like shape and occupy a larger area of land than multi-story homes because they don’t extend upwards. They also usually allow more space for additions and modifications.

In India, for example, the term bungalow typically refers to a single-family home and might have multiple stories. In Canada and the United Kingdom, a bungalow almost always solely refers to single-story units. Australian bungalows are similar to California bungalows, which is a one-and-a-half story home with a large porch/veranda, sloping roof, and Spanish details. The Chicago bungalow, which stems from the 1920s, is another popular style typically made of brick. The chalet bungalow includes a second-story loft.

Craftsman Bungalow - This style was created during the Arts & Crafts design movement, which was popularized between 1880 and 1920. The craftsman style is very popular and includes a covered front porch, low-pitch roof lines, a hipped roof, overhanging eaves, and decorative exterior brackets.

California Bungalow - This style was popularized from 1910 to 1925 and differs from the traditional bungalow because it offers one and a half stories instead of only a single-story setup.

Chicago Bungalow - Because this style originated in Chicago, it is traditionally a bit more narrow in size to accommodate smaller city lots. This style features a brick exterior, one and a half stories, and a full basement.